‘Never Enough’ is the theme of the 26th International Fly Tying Symposium, which takes place in November.

Enrico Puglisi will be among some of the world’s top fly tyers at the 26th International Fly Tying Symposium in the USA later this month.

The biggest gathering of the world’s top fly tying experts will be on parade in New Jersey, USA, later this month for the 26th International Fly Tying Symposium.

Described by the event’s founder Chuck Furimsky as the ‘ultimate candy store’ for fly tyers, it takes place at the Garden State Exhibit Center, Somerset, on November 19th and 20th and features more than 100 experts who will be revealing the secrets of their trade. Also in attendance will be manufacturers and retailers.

“There has to be close to everything ever used for tying on display and for sale, plus the latest new materials and hottest patterns to keep visitors busy all weekend,” added Furimsky. “There will be 100 tables and booths, plus lectures and big screens featuring fly tyers at work.”

With a theme of ‘Never Enough’ the exhibition hall will overflow with more than enough fly-tying materials, hooks, vices, books, videos, tools and more, according to Furimsky.

Another highlight of the action-packed event will be the 26th anniversary banquet which will take place at the nearby Doubletree Hotel on the Saturday evening.

New for 2016 is ‘Meet the Bloggers’ – a chance to catch up with the sport’s top commentators, including Tim Cammisa, Tim Flagler, Matt Grobert, Josh Miller, Jim Misiura and Loren Williams, who will be updating you on their blogs and their plans for the future. It takes place at 3pm on Saturday in the Seminar Room.

For more details on the event, visit www.flytyingsymposium.com . 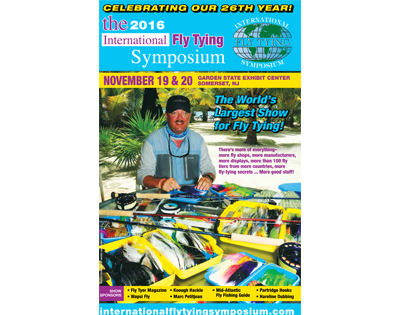 This entry was posted on Thursday, November 17th, 2016 at 10:00 am and is filed under News. You can follow any responses to this entry through the RSS 2.0 feed. You can leave a response, or trackback from your own site.