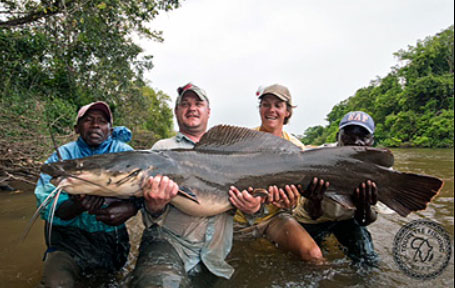 I had the privilege of landing about a 6’ long Vundu while filming a 1hr TV special on the Zambizi River in Zimbabwe and was really impressed to see this trophy caught nearby.

Thomas Andrews was the luckiest freshwater angler in 2014.  On the same day as the new Tanzanian Tigerfish record he landed the biggest Vundu in Tanzania as well.  The catfish was estimated to weigh at over 100 lb., not far away from the world record caught in Zimbabwe in 1981.

This entry was posted on Monday, March 30th, 2015 at 9:13 am and is filed under News. You can follow any responses to this entry through the RSS 2.0 feed. You can leave a response, or trackback from your own site.